Over the past 90 years, Parafield Airport has played host to some of the country’s most renowned pilots and aviation enthusiasts and was originally SA’s first Aerodrome from 1927 to 1955.

Parafield Airport was first used as an “all over” aerodrome in 1927, when Miller Aviation Company (later MacRobertson Miller Airways in Western Australia) and Australian Aerial Services moved from ‘the main aerodrome’ at Albert Park. Later that year, on 26 November 1927, the Royal Aero Club of South Australia built a hangar at Parafield, and bought two aircraft for passenger and training purposes. On May 29, 1929 two De Havilland Hercules Airlines, carrying 21 passengers, arrived at Parafield from Perth on the inaugural flight of the East-West Service. On October 1, 1929, 16 aircraft landed at Parafield in the course of the East-West Air Race from Sydney to Perth.

Click on the images (left) to follow the link to Australian Screen where you can view two clips of aerial footage by members of the Royal Aero Club of South Australia from Parafield in the 1930s.

On July 1, 1936, Australian National Airways was formed with passengers flying from Parafield to Perth, Melbourne and Sydney as well as country centres in South Australia.

During World War II, Parafield Airport was used by the RAAF as a Flying Training Unit using mainly Tiger Moth aircraft, with occasional use by a heavier general service aircraft such as the Liberator Bomber.

At the end of hostilities in World War II, the airfield plus numerous buildings were handed back to the Department of Civil Aviation and it continued to operate as the only civil airport for Adelaide until Adelaide Airport was opened for regular public transport (RPT) operations on February 16, 1955. Parafield was to become the secondary airport and training field.

In the early 1980s the Federal Government was laying the foundation for privatisation of its airports. The final stage of the program took place at midnight of May 28, 1998 when Parafield Airport Ltd commenced the long term leasing of Parafield, inheriting identified staff, facilities and equipment.

Parafield Airport is home to the Classic Jets Fighter Museum.  A brilliant living display of former RAAF and RAN jet aircraft from the 50s through to the 80s. 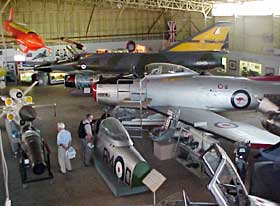 More photos of Parafield in the early days, and photographic history of South Australia can be found at the below link to the works of Darien D Smith https://memorybank.atkins.com.au/galleries/ddariansmith